A golf course employee who serves drinks to the golfers has revealed the bizarre tip she received from a man on the course in an effort to convince her to get dinner with him.

Cassie Holland, who works as a beverage cart driver in Las Vegas, Nevada, recalled the encounter in a TikTok uploaded in September, where she revealed that the man gave her three $100 bills that were ripped in half, and promised to give her the other halves if she showed up for dinner.

Holland, who goes by the username @cassholland on TikTok, began the video by explaining that she was sharing the story because she wanted to know if it had ever happened to anyone else.

Get all update News on watch online live streaming

The golf course employee then held up three $100 bills that had been ripped in half as she said: “What the hell is this? Three hundred dollars in half.” 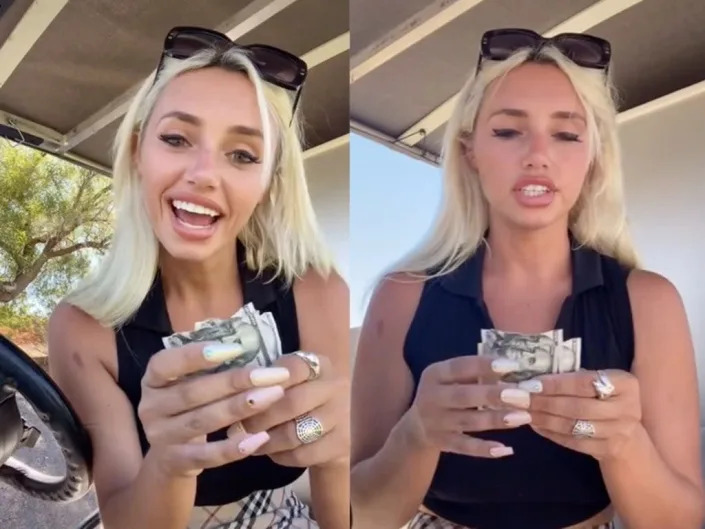 “So, how did we get here? You’re probably thinking someone tried to trick me and short me but oh no. This man had bigger plans in mind,” Holland continued, before recalling how the man in question had been buying drinks for himself and his friends and was “tipping well” and “being really nice” during their first encounter.

However, according to Holland, at that point, the man had claimed he was from out of town and asked her to go to dinner with him, an invitation which she said she declined.

After urging Holland to cancel her plans, the man then took out the ripped money, with the golf cart driver recalling how he’d offered her the money and promised to give her the other halves if she met him in front of a casino at 9 pm that night.

“So clearly he already had this whole idea planned out,” Holland said in the clip, before revealing that she had again declined the offer.

However, according to Holland, once she got back in her cart, she noticed that the man had left the destroyed money in her drink holder.

Holland then revealed that she was mad at first over the situation, but ultimately concluded that the golfer is the “dumb** that lost $300, before admitting that she doesn’t know how to handle the situation.

“So now I don’t know what to do,” she continued. “I wonder if he’s ever done this before and it’s worked ‘cause I can understand once you have the three halves you probably want the other ones.

“It’s funny because he probably thinks he’s a genius, but he really just lost $300 for nothing.”

The clip, which has been viewed more than 1.7m times, sparked a range of replies in the comments, with some viewers urging Holland to take the money to the bank.

“If it’s more than 50 percent the bank will usually take it,” one person commented, while another said: “You should take those to the bank.”

Others revealed that they have found themselves in similar situations, with someone else writing: “It happens to me all the time.”

“Happened to me too when bartending!” another viewer added.

The video also prompted comments from viewers disgusted by the man’s behavior and “audacity”.

In a follow-up video, Holland revealed that the man who’d given her the ripped money had shown up at the golf course again, with the golf course employee claiming that he gave her the rest of the money after admitting that he’d seen her TikTok video.